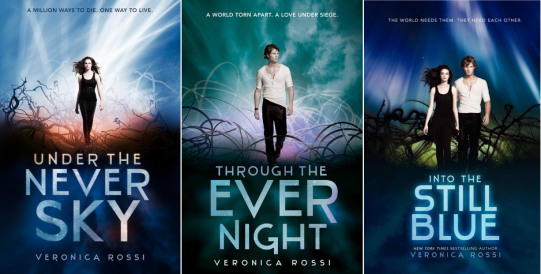 What’s it about?
The tag lines for the first book are “WORLDS KEPT THEM APART” & “DESTINY BROUGHT THEM TOGETHER”
Yes it screams romance! Set in a dystopian world the heroine Aria (like the name) is one of the few lucky ones living under a dome that protects them from the unpredictable and deadly elements of the outside world. We start off following her and a group of teenagers into a restricted area where those stupid teenage boys start a fire and only herself and the leader’s son survive (I’m glossing over a lot of things here). Suspicions are hurled at her as they suspect her of letting the outsider in. Meet the hero of the story Perry, (not so keen about the name, sorry to any Perry’s reading this).  Long story short Aria gets banished to the wastelands and destiny bring her back to Perry who saves her yet again! and again and again.

Did I like it?
Maybe after reading what I wrote above you might think no I didn’t but strangely I did enjoy it. All three books! Firstly I enjoyed the fact that it was written in third person and from only two perspectives. Aria’s and Perry’s. And unlike the last book of the disastrous Divergent series, Allegiant, I didn’t need to check whose perspective the chapter was being written in all time. Rossi was clearly able to distinguish the character voices. The story was decently paced, maybe could’ve been a little faster in some areas, and there were some other likeable characters and a splash of unexpected tragedy. I would even go as far to say that the second and third books were better than the first which is saying something.

Anything I didn’t like? (Slight spoiler alert)
Hmm had to think about this one. Nothing that screams out at me. I guess my only bone is that my favourite supporting character didn’t get a happily ever after. I didn’t really find it necessary for Rossi to kill off the love of his life. While it bring up so tear jerking moments I found myself hating Rossi for it.

The final say:
Read it! It’s an easy, well written and entertaining read.
A solid 3.5 (rounded up to 4 on goodreads) out of 5

Are you the type of person who makes a plan and sticks to it no matter what? Or are you the type that plans and plans but when push comes to shove you do what feels right and treat the plan as more of a guideline? Or are the last type who says screw the plan! Who needs one?

If you are a writer like me then you most likely have made an outline for your novel. The amount of detail contained in an outline obviously varies from person to person. For my latest novel the Deus I planned out the main events for each chapter while I was on my European holiday, taking inspiration where I could but then when I got home and started writing again my fingers didn’t care about the plan I had laid out. And when I went back and read what I’d written it was good. It was a dilemma, all that planning for nothing. Or should I go back and re-write the chapter?

How closely do you follow the plan that you have laid out?

In the end I came to the conclusion that I would use the plan as more of a guideline, who was I to change what the muse was feeding my fingers. I update my plan with the new information but I still keep the old plan too as you never know when it may come in handy later on. I’d love to hear what other writers do in the same situation.

What Kills Me by Wynne Channing 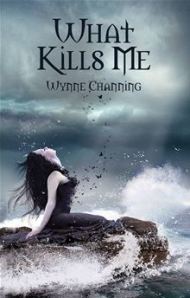 Now let me start off by saying you can get this book for free on Kobo. And I do recommend you grab it.

I don’t usually like books written in 1st POV. I find them very limiting. I really like to get into the heads of more than just one charter because as everyone knows there is always more than one side to every story. But well this book was free and the synopsis caught my attention.

After the first chapter I was hooked. I really enjoyed Channing’s writing style. It is light and fun, perfect for a YA. Now if you are looking for a vampire novel like Anne Rice’s Interview with a Vampire you are out of luck. But if you are looking for a vampire novel with a decent heroine and not a whinny one like Bella from Twilight…. opps my bestie is not gonna speak to me for a while after that comment. (I just couldn’t get pass the first half of Twilight… sorry.) Then I think this is the book for you.

What kills me is written in Axelia’s (love the name) POV and the seventeen year old is doing a home stay of sorts in Rome, Italy. Lucky girl. We get the idea that she’s a bit of a late bloomer looks wise, because she’s not really sure how to handle the gorgeous Italian boy/man that approaches her, and falls like putty in his hands. I think we all might’ve done that with a super hot guy at seventeen. Unfortunately he’s the wrong guy and well that’s where things go downhill for our poor heroine. Especially when the guy says he’s going to kill her! That marks the start of Axelia’s crazy adventure.
I love the two main characters in this book so much so I bought the second instalment and am looking forward to reading it tonight.